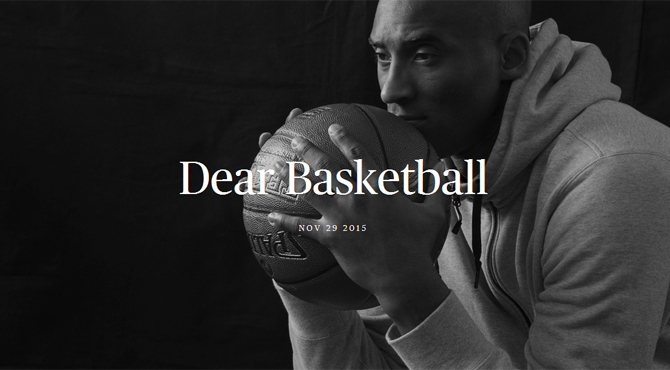 Just when you thought you’d seen it all Basketball Legend Kobe Bryant manages to marry two of the worlds most prominent entertainment giants – Hollywood and NBA Basketball – with his short film Dear Basketball.

After a 20(!) year long career in pro basketball with the LA Lakers he has racked up – to mention a few – 5 NBA Championship rings, 18 All star appearances, the 2008 MVP award, 2 Finals MVP awards and a single 81 point game, Kobe now also has been awarded with an Oscar!

When retiring from basketball he wrote and narrated a short film called “Dear Basketball” that was shown on the night both(!) of his numbers were retired by the LA Lakers. This short film now also have won an Oscar for the Best Animated Short Film and by the looks of it Kobe was deeply moved.

The movie itself is a beautiful, inspirational story about Kobe and his career and dreams growing up and a tribute to both basketball and hard work. In it’s simplicity it actually is kind of emotional to all of us bench-crew members who can only dream of playing on the center stage. It’s all about pursuing a dream and Kobe did just that. And what a player – for all you kids out there who just saw him in the later years I urge you to go back and watch some vintage Kobe. KD, Lebron and Curry will pale in comparison.

The film ? Watch it and enjoy!

As a tribute to both Kobe, his Oscar award and Basketball itself you will get a 10% discount on all basketballs at Bench-Crew using the code “dearbasketball” at the checkout.

It seems we are currently out of stock for this item. But we really want you to have what you are looking for so we can provide you with two options. You can place the order with us and we will order it for you but it may take a few days, or you can purchase it at one of our partners.