I was going to write a positive article about the new season that has finally arrived. It took about 6 minutes of the new season for that joy to disappear. One of the biggest off-season moves was Gordon Hayward signing with the Boston Celtics. Jerseys were burned, players got involved in the debate, parallels were drawn to LeBron’s infamous “Decision”. For Boston it was another step to really challenge the Cavaliers in the East and for Hayward a chance to play for a title contender. In a snap both of these dreams got crushed. About 6 minutes into the first game of the season between Celtics and Cavaliers – hyped more for another block-buster trade of Isiah Thomas and Kyrie Irving – Hayward landed awkwardly and broke his leg. Just like that! It all changed instantly. 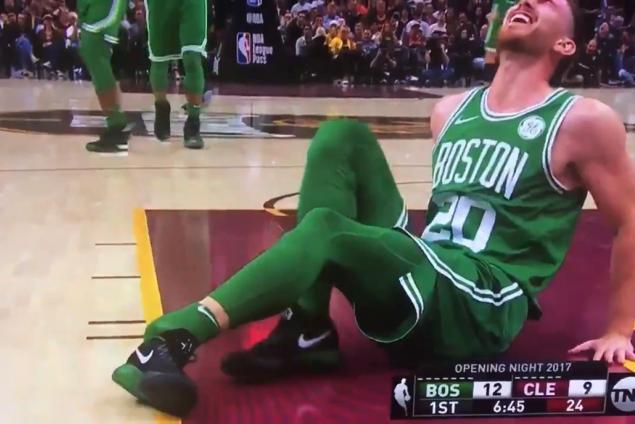 Now, plenty will be said and discussed about the effects on both Haywards career and how the Celtic’s should move forward without their newly acquired franchise player. But what I wanted to comment upon was the reaction of the players, the crowd, the viewers and commentators. It was deeply moving.

Basketball at this level is a competitive sport. And the players making it this far are extremely competitive. This also means a lot of words, looks, trash-talk and social media bashes goes around. Also many of these players are accused of being selfish, prima donnas with to large egos. But an incident like this really puts the game beyond competitiveness. Gone were all harsh words or looks. It wasn’t about winning the game anymore. What we saw was a bunch of friends, all enjoying playing basketball, being deeply affected by the situation. Praying, crying, caring or just shaking their head in disbelief. Gordon himself looked at his leg in disbelief. Commentators went all quite for several minutes just letting the situation sink in. All you heard was a constant mumble from the crowd. Everyone appreciated the magnitude of what just happened. It was sad.

But it was also kind of nice to see all these players caring. And realizing that after all it is just a game and winning isn’t all that counts. There is also people, colleagues, friends and just having fun playing the game we love.

Gordon – Come back soon! You deserve to be a part of this.