Did Hayward help the Celtics win?

15% discount on Molten GG and GF Basketballs – as decided by Hayward!

Well they won by 56(!) points – everybody helped. So maybe this was not the best game to evaluate Hayward’s value compared to the rest of the team. The Celtics took over this game from start. Bulls never led. And the point margin when finished was brutal and a rare happening in the NBA. Celtics are good, Bulls are not. But the difference should not be this big. And the game was not much of entertainment, either.

Gordon Hayward did little to notice in this game and finished with 5 points in 25 minutes of pay. I supposed he didn’t need to do much more and left the stage for others to shine.

Next week we will take a look at one of our favorite players so far this season – Tobias Harris of the Clippers. One of the many players that acts in the shadows of the really big names, a bit underrated, but always delivers. Harris is known for always being prepared, with set routines for all his preparations going into a game. He is very aware of what he eats and when, always works hard and is all serious and professional about his game.  He was good when paying for the Magic, became better while playing for Detroit but has really bloomed this year with the Clippers. It was one of those win-win deals when Clippers parted ways with their superstar Blake Griffin for Harris (and Boban – Go Boban!) Both the Clipper and the Detroit fan base were sort of skeptical, as were the two players. But there are no longer any doubt – they are both playing some of the best Basketball of their respective careers. 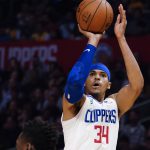 Also worth mentioning is his growing friendship with Boban Marjanovic, who was traded with him from Detroit. Boban has been a fan favorit wherever he has been, but is now also building an online presence together with Harris – Bobi and Tobi. Check it out. Boban is such a giant in more ways than one. And he dunks without jumping!

If Harris is having a good offensive year, the brightest defensive star right now is the OKC. If you ever need a school book defensive showcase, just watch the game vs Detroit last week. They totally shut everything down and their help defense was superb.

So the question next week, will they be able to also shut down Tobias Harris when paying the L.A. Clippers on Saturday. Whatever Tobias manages to score,  will be the discount on any leg sleeve from McDavid during the following week.